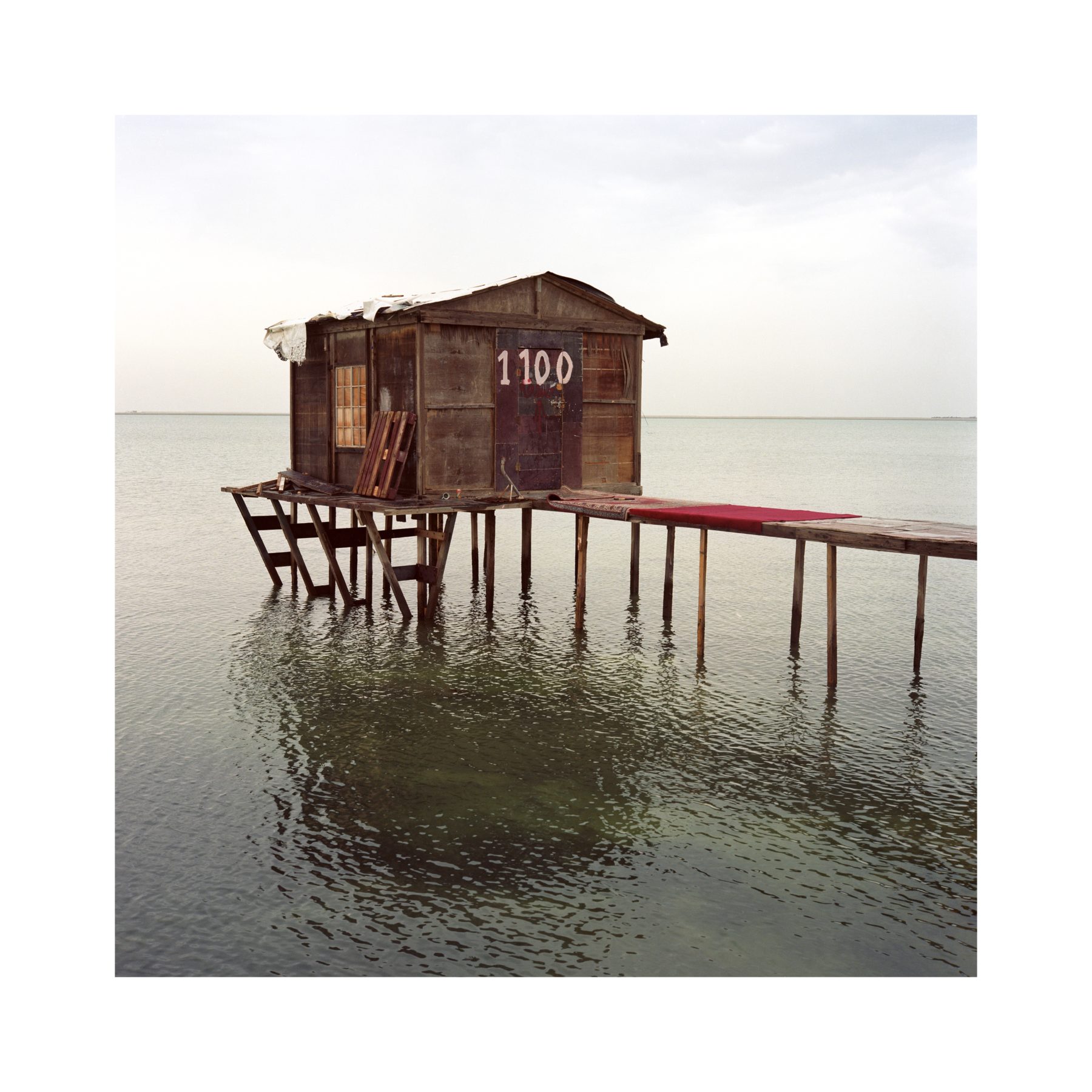 Camille Zakharia, a Canadian-Lebanese photographer, has documented through his work, his life’s migration from his Lebanese homeland across Europe, North America and his present home in Bahrain. Through his lens, he explores the landscapes of his journey, sometimes reconstructing them as spaces of his own memory and longing for a home, often reflecting on the people that accompanied him along the way.

Intensely personal and notoriously inaccurate, memories once created, exist entirely within our minds. Through constant rumination, we rewrite our own history, combining events across years and decades, until they merge into each other, softening the harshness of our transgressions – justifying, romanticizing, recreating, altering, and thus perfecting our personal narrative.

In so doing, we create worlds that never existed, or at best, did not exist as we remember them. Perhaps it is something about my very nature that craves the blurred boundaries and the faded distinctions, rather than the harsh and historically accurate truths. It is the soft and gentle memories that sustain me, but I’m not entirely unaware of the liberties that I have taken with them and so, every time I return to Lebanon, I find myself endlessly visiting and revisiting the sites where those memories were created in an effort to reconcile the images in my head with those I see around me. I photograph feverishly, trying to capture the essence of a moment in time as if to reassure myself that the place exists and exists almost as I remember it.

Through constant rumination, we rewrite our own history, combining events across years and decades till they merge into each other, softening the harshness of our transgressions - justifying, romanticizing, recreating, altering, and thus perfecting our personal narrative.

Objectivity remains an ever-present struggle as I attempt to document rather than interpret the places that were the backdrop of my childhood. However, the result is a portfolio of images tinged with nostalgia and an ongoing process of redefining my interpretation of home, identity, place, boundaries and country that has lasted 25 years and continues unabated.

While experiencing Lebanon through an intermediary camera, I was surprised to find my childhood home full of family memories, childhood photographs and the transcendental peace of religion that I was not able to experience as a child living in the same space, whose sense of security was shattered by a brutal civil war outside its walls. I found the resilience of the human spirit, determined to go on living amid the rubble of what was once a thriving neighborhood.

Today, two decades after the end of the war, many buildings remain scarred, war-weary monuments of violence while people live within and around them. Their lives go on: they love, work, celebrate and grieve. I found the indomitableness of nature reassuring. Fairuz still sings. The mountains still stand. The fields and olive groves still grow and yield their bounty despite the ravages heaped upon them by man. The nostalgia that I have discovered in and through my photographs remains tainted by the heaviness of regret for an idyllic childhood whose innocence was abruptly cut short by a brutal war and my inability to give to my children the life that I had once hoped Lebanon would offer them as a home.

Sharjah, along with other Gulf States is going through tremendous changes which most visibly manifest themselves in the urban landscape. It is these changes that I am attempting to capture in “Sharjah – History Images” project, prepared solely for the coming Sharjah Biennial event, photographing old and new facets of Sharjah’s urban landscape, and reflecting on the emerging culture with its mutating skylines.

Oftentimes, we are so eager to reach a destination that we forget to take note of our point of departure. The project is a visual documentation of the ongoing changes, juxtaposing contrasting images. As the cities grow from an innocent infancy to an awkward adolescence, they forgo the chance to evolve on their own, being forced instead to import a vast array of influences. International architects and urban planners change the skyline with their monumental designs curiously out of place in the desert. Restaurants serve food from different countries with flavors that assail the local palette. High street fashion overwhelms the simplicity of indigenous attire.

Satellite television introduces a new sense of humor and vastly different values, resulting in a different interpretation of reality. Entertainment developed from marbles and skipping ropes to bicycles and dubbed cartoons and then to Playstations and iPods in three short generations. The internet is ubiquitous as are mobile phones and 4-wheel drives.

As a photographer primarily interested in urban landscape, it has been the changes in the shape and size of a city that fascinated me the most. However, I have come to realize that the fast expanding cityscape has come to represent no more than a mere proxy for the social impact of the breakneck speed of the introduction of foreign influences. I am now far more interested in the effect of the myriad alien influences on a particular people as reflected in their culture, values and lifestyles. In Sharjah, what will the resulting culture look like? I am privileged to be in this part of the world at a time when this “hybridity” is in progress and aim to document it in an effort to examine and understand it.

The changing character of Bahrain is the subject of Distorted Memories series, a metaphysical journey around the island I have made my home. Though the individual pictures appear to be realistic images, they are in fact composite montages, through which I try to capture my own personal impressions and recollections of places – landscapes and cityscapes, deserts
and villages – of which many are already lost. Camel markets and traditional shops –windows have been replaced by commercial complexes. Festivals and elections have come and gone, surreal situations and odd juxtapositions may or may not have occurred. I question the reliability of memory, the very basis of history and identity.

Al Bar, arid and lifeless for an extended period of the year due to the oppressive heat, transforms into a lively place between November and March when the weather cools off.
Tents of varying types can be seen for miles, hosting people from different walks of life, all seeking a closer relation to nature away from the consumerist culture that has dominated the region since the turn of the 21st century. As a photographer with an interest in documenting the environment that shapes us, I have been photographing the landscape of Al Bar in Bahrain for the last eight years, attempting to paint the true color of the place and its inhabitants. The results are fascinating images that reflect the intimate relation between the people who are inhabiting the tents and their surrounding desert.

Since the start of the millennium, Bahrain has been in the throes of sweeping architectural upheaval that has wrought major changes on the urban landscape. It has claimed large tracts of the sea, absorbing it into the land and in the process changing even the coastline of the tiny island nation. The low-rise buildings that dominated the urban landscape are dwarfed by the gleaming glass towers that erupted out of the flat, barren earth, seemingly overnight.
Amid the metamorphosis of the urban landscape, particularly along the coastal line, stand a few fishermen’s huts that speak of a human insistence on a more direct contact with the natural environment. These fragile architectural structures built viscerally, without architects, once gathering places for pearl divers, today stand scattered along the shoreline, at the edge of the reclaimed and soon to be claimed sea. The huts host five o’clock tea sessions and backgammon games, a small attempt to reclaim a zest of leisurely coastal space.

In 2007, I traveled to Oman, a country which, unlike desert states elsewhere in the region, has for centuries benefited from water – both ground water for agriculture and the sea for fishing and boat-building. This mosaic of images charts a fictional water course from the mountains to the coast, from traditional villages to new urban areas. I trace the uses and influences of water: it supports life, it shapes society, it provides livelihoods, it gives pleasure, and it is an essential part of Muslim ritual. But today, the mechanization of water management is changing the process of farming and the actual landscape – even the desert is now being encroached upon both by reclamation for cultivation and by urban development – as well as the planning, design and construction of the built environment.

Camille Zakharia graduated with a Bachelor of Fine Arts from NSCAD University Halifax Canada in 1997 and a Bachelor of Engineering from the American University of Beirut in 1985. Using photography, photomontage and collage, Zakharia makes work about identity and displacement, reflecting his own life journey.